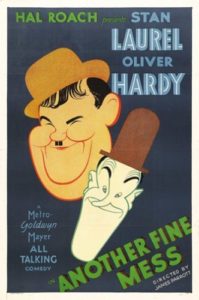 We end Season 7 with some slapstick as Laurel and Hardy yuk it up in their classic short Another Fine Mess. In our end of the year Megasode we also take a look back at all the movies we’ve watched, induct new members into the Hall of Fame and generally have a great time. In Seen It, we discuss odd men, followed birds and a little obscurity you’ve probably never heard of called Star Wars.

One Response to “Laurel and Hardy”

No donation is too small